I have been super-swamped lately. Plus, I am preparing to go on vacation to Florence and Milan, Italy mid-March so deadlines are intense til then.

I squeezed in these sketches for my friend Cheryl's and my nephew's birthdays. Cosmo is a really cute dog. I think it is the ears that make Papillon's adorable.

As for my nephew's card, he just turned 11. Any excuse to draw giant robots, dragons and mayhem, is a good one.

Posted by Christina Wald at 3:41 PM No comments:

Wordsworth and the Dragon Chapter Illustrations

I have had so much fun working on these black and white illustrations for Wordsworth and the Dragon! In a time when so much is over-rendered, the simple ink drawing is refreshing!

Posted by Christina Wald at 9:59 AM 2 comments:

Email ThisBlogThis!Share to TwitterShare to FacebookShare to Pinterest
Labels: black and white, Scotti Cohn, wordsworth and the dragon

Some Downton Abbey Fun and Maybe Not So Fun

As many know, I have been a huge Downton Abbey fan. So, of course, last night's episode was a disappointment. I fee like the writing since the first season has been uneven. There were many other ways to handle the "Matthew" situation:

-Matthew could have been kidnapped by aliens
-Sent to India
-Sent to the mad house
-Recast like Bewitched/Rosanne characters
-A Doctor Who solution... Cast David Tennant as Matthew!

-The grandkids, a little older, are given puppies and/or kittens as gifts from the Dowager. They are promptly killed off in a freak steamroller accident.

-Matthew will have an identical cousin; Edith will marry him. Mary will acquire more and more cats and live in a Grey Gardens situation.

-Hercule Poirot shows up and more main characters start to die in strangely unlikely ways. Who is the murderer?

And of course a little Ultimate Sinister concept painting showing the heartbreak of jilting...

Posted by Christina Wald at 10:18 AM No comments: 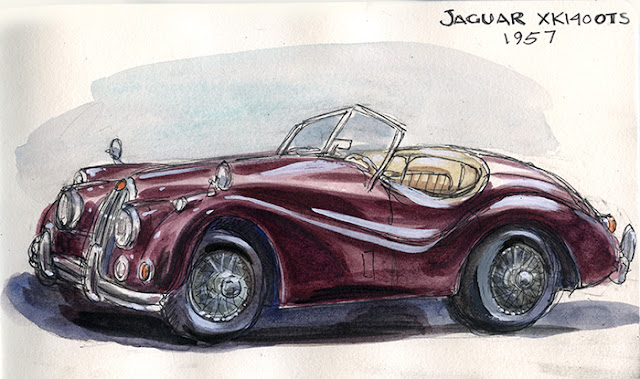 Amy Bogard and I took a quick detour to the Cincinnati Art Museum to sketch after the Illustrators Lunch at Arthur's.

We could not resist this cool Jaguar. The room also has some amazing Rookwood pottery pieces.

I did a couple quick sketches for my class of David Tennant Thursday evening.

Here are some scans. He has an interesting head and hair shape well suited for toon form...

I was initially drawing Helen Mirren, but no one seemed to know who she was. My luck that I picked the only British actress not in a Harry Potter film...

I went with my friend Amy to Krohn Conservatory after the weekly illustrators lunch for a quickie sketch session. It was also a good chance to take photo reference of tropical and rainforest plants for an upcoming project.


I sketched the outside of the Krohn in the fall. So many cool structures to choose from... I can hardly wait for the butterfly exhibit.


Posted by Christina Wald at 2:12 PM No comments: