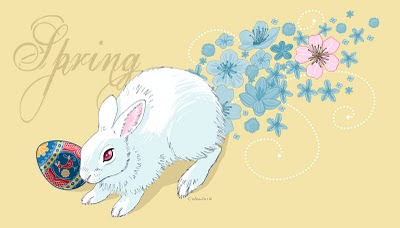 Here are my spring e-mailers this year. Above is the style I plan to use for my graphic nover version of Six Swans and below is a spring painting. I kind of love painting bluebirds. I hope to and photograph some this summer when biking!
On the top picture, I snuck in a pysanka egg. I am learning to make them from my friends Theresa and Paula. They are really good at it-I have a long way to go... 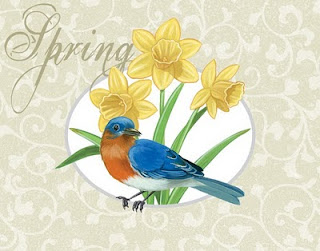 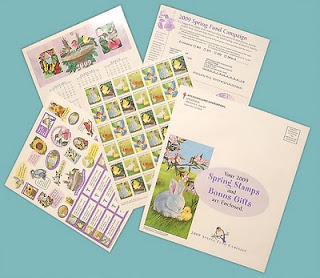 In honor of Easter, a mailer that I licensed my art to last year. Hopefully a lot of people donated to them when they saw it!
Posted by Christina Wald at 4:11 PM 2 comments: 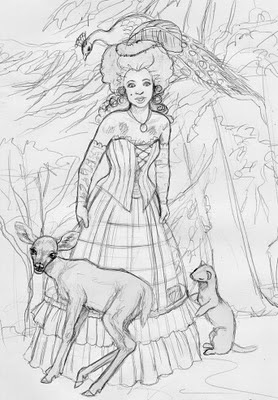 This is a sketch for a series of paintings I am doing for the seasons. The plan is to make some sort of 2011 calendar on one page with the four paintings. The New Yorker did it so why not?
This is winter so the palette will be mostly monochromatic. Her dress is the hoop underskirt representing the trees without leaves. Fall will be her dress in oranges and reds and tattered and so on... I promise sketching this did not summon the bit of snow we got last night ;)
Posted by Christina Wald at 1:00 PM No comments: 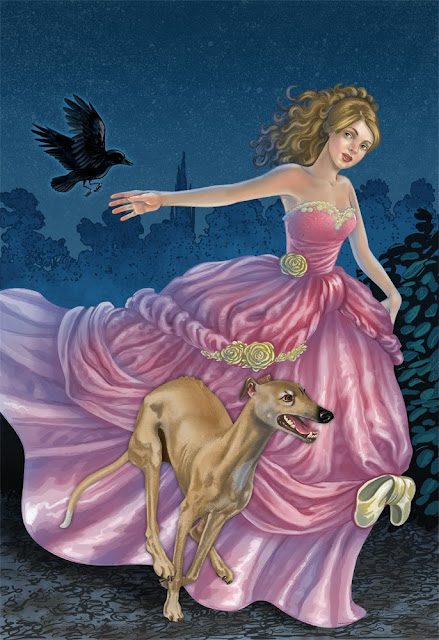 I will be adding prints to my Etsy shop all week. Stay Tuned!
Posted by Christina Wald at 10:32 AM 2 comments: 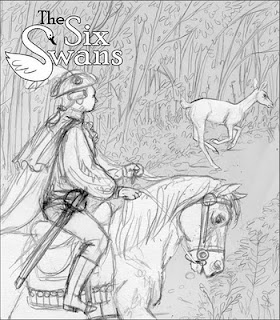 I am toying with doing a comic version of The Six Swans. I thumbnailed it the other day and it came to 21 pages! I am pretty booked so I will probably not be working on it for a while but here is a start of the first page. 20 to go! I may shorten it.

The adaptation is extremely loose.

I am setting it in a Rococo time period. I saw Tim Burton's Alice in Wonderland last night and really enjoyed the costume design-especially in the courts.
Posted by Christina Wald at 8:27 AM 4 comments:

Check it out! Bat World Big Apple wrote a really nice review of Little Red Bat!
Posted by Christina Wald at 9:51 AM No comments:

Little Red Bat is Out and Available! 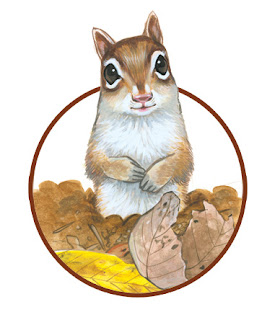 Have you ordered YOUR copy yet???!!
Posted by Christina Wald at 4:01 PM No comments: 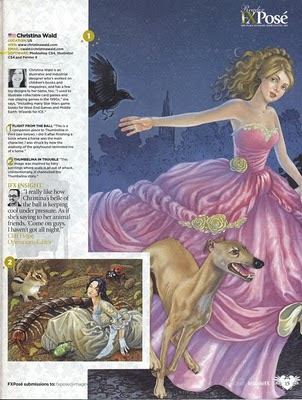 The Imagine FX (Issue 55) that just came out has a showcase page of my work. It is a cool issue with a focus on Clash of the Titans and a special section with original sketches for the first movie by Ray Harryhausen. We had a discussion at this week's illustrator lunch about how Harryhausen as a concept artist is not usually how you think of him, but he clearly is.

Check it out. It will be on US newstands in a couple weeks.

Posted by Christina Wald at 3:57 PM No comments: 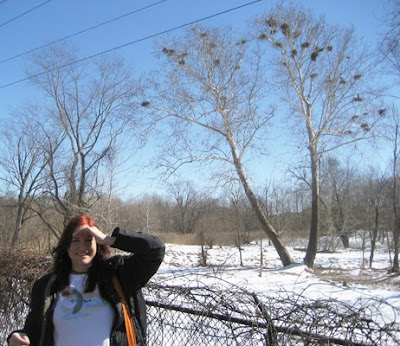 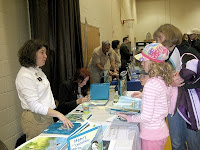 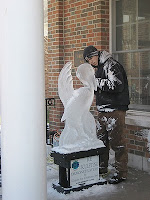 Had a great time at the Heron Day at Old Trail School! There was a great turnout on a lovely day in Bath Ohio. The day includes hikes to see the herons, crafts for kids, an ice sculpting demo and kicks off with a pancake breakfast. I had a table and also read the book to groups of kids and adults twice in the stage area.
Heather Swift, the school librarian helped me at my table most of the day and my friend Lisa Schnee came over, took photos and also helped at the table. It was wonderful and everyone was hospitable. 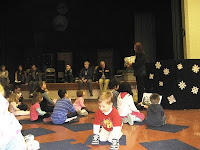 After the event, we went out to the rookery and watched the herons swooping and perching. The sight of so many at once was inspiring! I would like to go back once chicks have hatched! 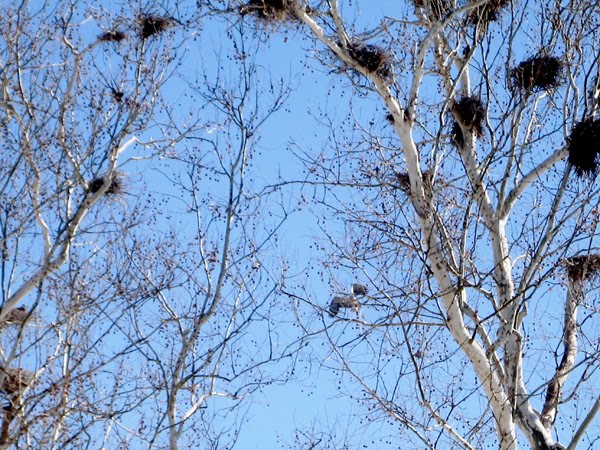 Posted by Christina Wald at 3:56 PM No comments:

Little Red Bat is out next week!
While researching to do the illustrations for the book, I got referrals to several people who had experience rehabilitating red bats. Since they do not do well in captivity and are not regularly in contact with humans, it took several phone calls to find Bob and Ann who had just rescued a whole red bat family!
They generously allowed me to visit their wonderful home in Ft. Wayne, Indiana and the bats in their care.
Bob does many school visits and community events to help people understand more about bats to help assuage the fears and misunderstandings around them.
1. Tell me a little about your background.

Bob is a retired electrical engineer. Served 4 years in Air Force (ours). Worked for Vanderbilt University, WLAC-TV in Nashville and IBM in Nashville while studying for a Bachelor of Electrical Engineering degree. Worked for Magnavox for 25 years on Government and Industrial products. Worked part time for Wild Birds Unlimited as a "Bird Feeding Specialist" for 10 years. From 1992 to present involved in raptor rehabilitation.

Ann is a retired Special Education teacher. She worked for a year in England with men with Down's Syndrome. She taught in the Nashville and Ft. Wayne school systems.

After raising 3 adopted special needs children (and a special needs husband) she worked for Wild Birds Unlimited for 13 years. She has been involved with raptor rehab since 1992.

2. How did you get involved in bat rescue?

One of the raptor rehabbers we worked with also rehabbed bats. She lived 30 miles away. I would take "rescued" bats to her since everyone else was scared silly.

She moved to Florida and left my name with Ft. Wayne Animal Control. First we took care of a few bats, then we suddenly became "bat experts" and were requested to make presentations. This lead to more bats needing rescue. After a year, I attended a week long course in Texas at Batworld.

3. What species of bat do you get the most calls about? 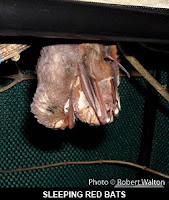 4. Describe a typical rescue from capture until release.

Typically we receive our rescued bats from Animal Control. However, in some cases, the bat is in a location where Animal Control officers will not go. In these cases I will climb a ladder, crawl in an attic, etc. to retrieve the bat. The bat is placed in a "padded" container and taken to the "bat house". The bat is weighed, sexed, measured, rehydrated with a subcutaneous injection of Ringers Lactate, given a rabies shot, and then given age appropriate food (milk, blended mealworms or mealworms). The bat is then inspected for injuries and treated as required. Depending on the species, the bat is placed in safe enclosure to feed, rehabilitate, etc. Each bat receives daily care. When the bat is ready and the weather (and insect) conditions are good the bat is taken to the flight pen where it must demonstrate its flying ability over several days. If possible, the bat is then returned to area where it was "captured" and released.
5. What should someone do if they have a bat in their house or see an injured bat?
Please refer to http://www.batcon.org/ or http://www.batworld.org/
The best thing is DON'T PANIC. If the weather is good just open the doors or windows and let them out.

6. Have you ever come across a bat with the white-nose syndrome?

7. What other animals do you rescue?
I also rescue raptors (hawks, falcons, eagles and owls) for Soarin' Hawk Raptor Rehabilitation in Ft Wayne.
8. You do a lot of traveling and mentioned you recently were in Tanzania. Do many of your trips involve seeing animals in other countries? Do you have any plans for travel in the near future?
Almost all of our trips involve looking for birds and animals. We stay out of cities. We usually travel with "local" guides and learn about the culture.
Future trips will include: Colombia, Brazil and Indonesia.

9. Finally, if someone is interested in learning more about getting involved in rescuing bats, how would they get started?
Contact Batworld in Texas. www.batworld.org 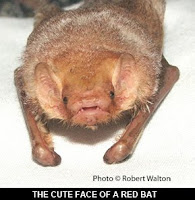 The Process of Illustrating a Children's Book 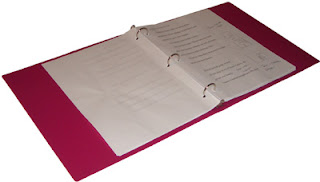 Scotti Cohn is doing a cool web series about creating picture books. She just put up a segment about my process.

Check it out!
Posted by Christina Wald at 4:18 PM No comments: 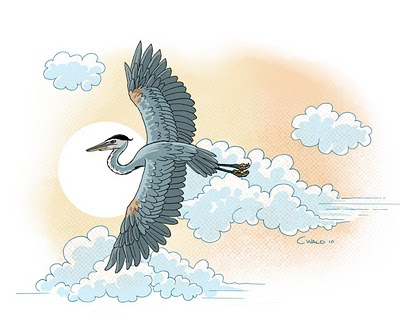 I wanted to wear something heron oriented on Heron Day on Saturday and whipped up this little drawing to put on a shirt for the occasion. It is a great excuse to try out some new t-shirt transfer paper I got in a sampler from Papilio Inkjet Media. Hopefully it will look good on the shirt. I have a friend with a heat press to do this test shirt so I can see if it works.
Posted by Christina Wald at 7:59 PM No comments: